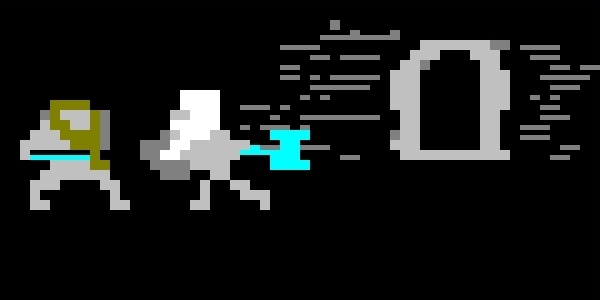 For the projects mentioned in the last post, we need a mechanic. How can we speed this up? It’s easy: Dakost, mason and mechanic, gets a vacation from one of his professions. Getting everything set up will still take some time, but now someone is working on it. The first wing of the bedroom-floor is mostly finished. The remaining floors will be smoothed when all rooms are done – rooms are more important right now.
Some days later, the outpost liaison arrives, and with him a caravan… wait, what? I really hope this is a joke. We need some trade. Alright, we don’t but I’d still like to show you some.
It seems that the traders left their wagons. I can live with that. We request the presence of our trader Bëmbul at the depot and order some goods to be carried up here. I’ll take any barrel containing crafts, toys and instruments, and some gem barrels. Our haulers get to work while the merchants arrive and unload.
The meeting with the liaison brings no grave news, so it isn’t shown this time. We request some goods from home to avoid getting chastised over our isolationism, and the mountainhome will pay double for fish, prepared meals and quivers and nearly double for instruments and shields next year. We can work with that.
While the merchant still haven’t reached the depot (our haulers brought some stuff in already – spot the barrels), we see our beekeeper moving a wild colony into one of our hives. Melbil currently carries nearly 15.000 bees around. In his beard, I presume. His neatly combed beard. Please do note the positive emotions generated by high quality furniture. I really need to start building a proper dining room…
The merchants have unloaded their goods, so we can finally start trading. Their goods are on the left side of the screen, ours on the right. Every good has a value and a weight – we can’t cheat the merchants out of their profit (we would need a better trader for that) and we can’t send them away with a whole mountain (literally) in their pockets. My plan is to buy every piece of wood they carry, some foodstuff and drinks, seeds and cloth and leather barrels to start sewing some clothing. We also buy a pair of horses, a pick and an anvil for around 5000 shinies. We give them wares worth around 7000 shinies for this, and they accept the trade without any further request. Sometimes the traders start asking for large cut gems, worth some 1000 shinies, totally ripping us off in the process. Greedy bastards… Anyway, we need more crafts now. For next year… We also have what the expert calls “a bloody shitload” of mussel shells in our remains pile. Let’s make shell crafts. Lots and lots of shellcrafts. We also could decorate objects with shells, but decorating objects will most likely result in decorated beds, and decorated beds are something we don’t need yet. This will be a dining hall, three stories high, with the closest thing to a cupola we can construct. The walls and the pillars will be smoothed, the pillars will additionally be engraved. We also should create a secondary stockpile close by for cooked meals and drinks, but we’ll burn that bridge when we come to it.
Meanwhile: Migrants. Eleven, this time. The most useful among them is Etor Oltarinod, a mountain of a woman and an engineer. We really need more engineers. Another thing we really need is doors. Yep. We’re out of doors. Some of the guys will have to do without until we get restocked.
At this point the game slows down more and more. My netbook wasn’t build for this. But we will go on. With a dead dwarf. The workers kept getting interrupted by wildlife. Nothing to worry about – usually. Nangêsudar, a cave crocodile, seems to have killed at least one of us. Let’s see how this plays out. I wanted some more time before finishing the burial chamber, but at least a part of it needs to be prepared now. We promote Dôbar, the hunter of our first group, to the position of militia commander. Why? Because we can order the military to kill someone, in this case the bloody crocodile before it wakes up.
And as if this isn’t enough trouble already, our dwarves elected a new mayor. We also have to prepare the proper bedroom, office, etc. I’m very grateful for the do it now-order in the workshops…
While nothing in particular happens – all work and no play for our dwarves – Meng Zurtîrthocit, a stonecrafter, is taken by a fey mood and claims a craftsdwarf’s workshop. To give him access to all the materials he needs we cancels the stockpile link and wait for a brand new artifact, and after a while he gets to work using some stone and some gems.
The cave crocodile seems to be still alive. Several more dead dwarves were found, and the fiend is more broken than before. Not broken enough, obviously. Maybe I should draft the other hunters into the military to get this beast killed. Four coffins were carved and placed in the newly dug burial hall, and I really hope we wont need any more.
And as trouble never comes alone, the mayor ordered the construction of three grates. I have no idea why, and we really have better things to do, but an unhappy noble will start punishing people for not fulfilling his requests. We order three grates via the manager, and that’s it for today. I hope that we will finish a certain project during the coming last month of autumn and that we get this croc down. And we probably will rise the room value for our mayor to “decent” by giving our noble some statues. Nobles love statues.