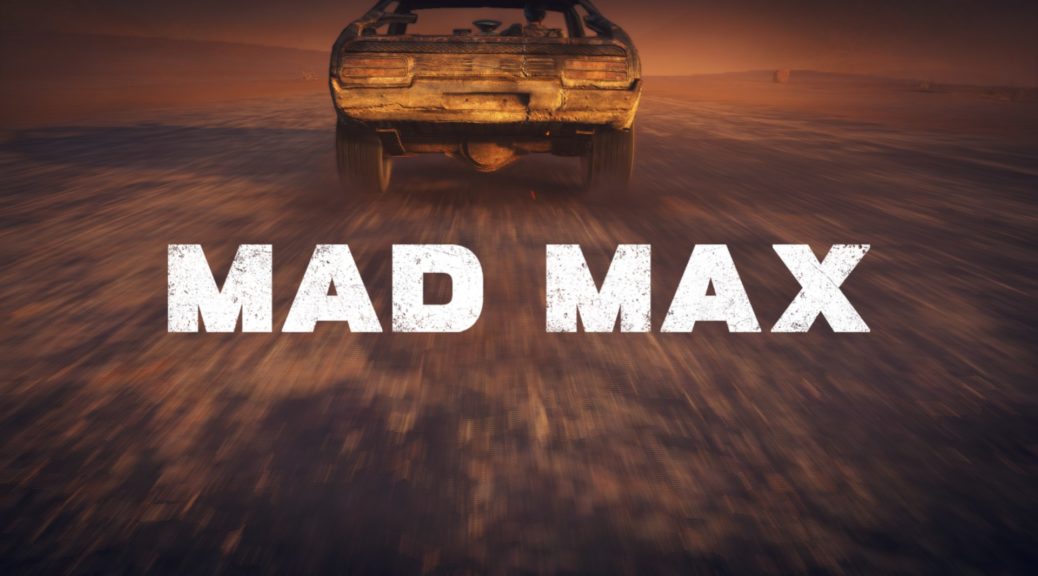 Yet another work of fiction in which we follow the follies of Max Rockatansky. Whoever thought of this name still deserves a medal.
In case this isn’t clear: this is about the 2015-multiplatform-game (inb4 “late to the party”), not the 1990 NES-game.

Mad Max, build somewhat around the most recent movie of the franchise, Fury Road, in that it shares some of the locations, some of the lore, and some of the characters. It is a game build using the generic open-world-blueprint without being in any way innovative at all. Which is not a bad thing: the game knows perfectly what it wants to be and manages to be exactly that. I cannot say that I’m extraordinarily thrilled by it, but with the exception of some parts of the story I’m by no means disappointed.
Obligatory warning: there will be spoilers beyond the cut. Consider yourself warned. I also totally forgot screenshotting things, so… yeah.
It all starts with Max fighting Lord Scabrous Scrotus of Gastown, son of a certain Immortan Joe, lodging a sawblade firmly inside his brain. Scrotus survives somehow and now holds the teeny-tiniest grudge against Max.

Early on, we meet our personal hunchbacked blackfinger Chumbucket, madman and mechanic extraordinaire, who sees in Max a man sent by the angels to drive his Magnum Opus, his great work of automotive engineering – once it’s done, as there are a few critical parts missing for achieving perfection.
These parts can be attained around the Wasteland, unlocked by completing gameplay challenges around the different districts or by doing legwork for the rulers of these districts.
Gameplay-wise, it’s the same in each area: you have the local head-honcho sitting in his upgradeable base, you have a reconnaissance balloon in each sub-district from where you can discover local points-of-interest, and you have said points of interest: Scrotus’ scarecrows and sniper posts, encampments of some variety and also convoy routes and minefields (which have to be found by driving around). Which each of these taken down, you lower the threat posed by Scrotus hordes in an area, unlocking upgrades and upon finishing a region completely eliminating Scrotus’ patrols from the area. Other upgrades you can unlock by doing specific tasks for the local ruler, like tracking down people or resources.
In terms of resource management, you rely on scrap which you get by blowing enemy cars up, scavenging scavenging locations and liberating camps, this resulting in regular deliveries.
There are also races scattered across the waste, but as I ignore this gameplay-element whenever I can I wont go into that beyond “they are there, and you can do them to unlock cars”.
It was I guess totalbiscuit who called this game “open world game, the open world game” – and he is completely and utterly right. Mad Max does not raise a finger to innovate, but it doesn’t have to to be enjoyable.
The game is mechanically absolutely solid: the car physics is game-y but fits the setting, the hand-to-hand-fights have a heavy, meaty feel to them, the upgrades provide noticeable improvements, and oh boy the waste looks gorgeous. The story… well, the story provides a background for the plot. It does this reasonably well.
If you enjoy open world games and the Mad Max-setting: give this one a shot. You wont regret it.

HOWEVER: there is a story-mission I had a very hard time coming to terms with, and the ending is either complete and utter dipshit or designed for a completely different type of player than I am.
To get the V8 – the holy, the glorious V8 – the game forces you to do a race in Gastown.

This race is… I ranted some several hundred words on fb about this. It’s a course in Gastown, so you have walls on both sides. You have n minutes to bring the car of  Stank Gum down before you explode. And there are other AI-opponents, respawning and trying to stop you. Those who enjoy racing challenges (or racing games in particular) probably have loads of fun with this. I didn’t. What helped in the end was reconfiguring the Magnum Opus away from being a tank (which is a necessity for survival in the waste) towards maxed-out handling. I can see why this race was put in. In fits the story, it’s thematically appropriate, but I still think it is not as well designed as it maybe could have been. Your mileage may vary, obviously.
The other BIG problem is the ending. Either it really is a joke, or it is designed for people who don’t do EVERYTHING before moving on with the story. It felt not a bit challenging, especially not compared to most other encounters in the game (which might be different going in NOT fully upgraded, but who does this kind of things?), it felt more like a semi-interactive cutscene than gameplay, and over its course not only Lord Scrotus is killed but also Chumbucket and the Magnum Opus – Hope and Glory, two other important story characters, are killed off earlier by Scrotus as a very personal revenge for a certain sawblade, promoting Max to go after Scrotus. And then: Of course it isn’t. It’s an open world game, and there might be stuff left to do. Soooo here you have all the recently killed characters back, go and have fun.
#what
I cannot think of a way to make this any more… anti-climatic. I understand why they did it, but for me this was the one point where the open world-mentality of the game broke it for me. It just feels so wrong…

I stay by my earlier words: Mad Max is a very solid open world game and for me it was a thoroughly enjoyable experience. If you like this kind of game and the setting, this might be the thing for you – even if some things could have been handled better.