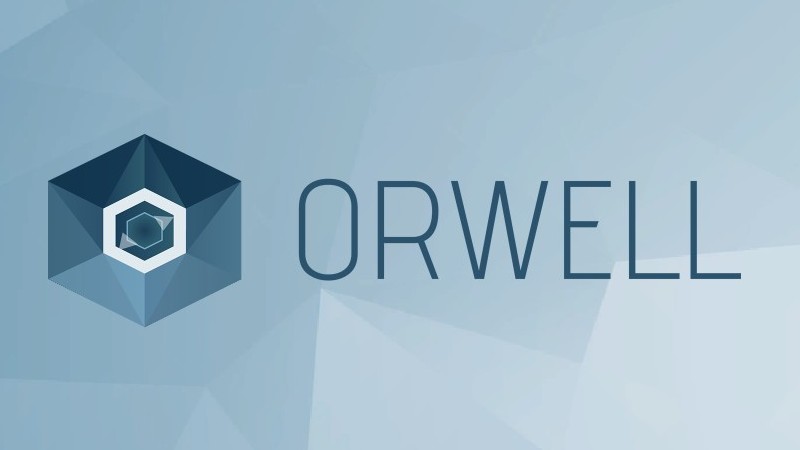 Orwell.
Yes, this game is exactly about what you think it is.
Surveillance-state gamified.
If you liked Papers Please, this might be a good investment – for 10€ on steam it’s not even a huge money-sink. However, while this game does quite well overall, it is not without flaws.

There are – as usual – some spoilers ahead.

The player slips into the skin an Orwell-Investigator for The Nation. And as this is how things go in these stories, a bomb goes off on the morning of our first day. What an opportunity to test the system.
Symes, our appropriately named supervisor, starts giving us the tour of the system. On the left side is the profile of our currently selected suspect (here rather empty, as I took it from a new game), with common data on top and details bits of intel below. It’s also the side of the system Symes can access, more on that later.
On the right side is the reader, where we can access several sources from websites to police-, justice- and medical records up to bank accounts. There’s also the listener, used to snoop into written and verbal communication, and the insider, to access suspect’s desktops and smartphones.

The Nation recently passed the Security Bill, opening a wide array of measures against the population to the state following hard times with terrorism and trouble in the region. Sounds familiar? Good.
Part of the Security Bill is the Orwell Surveillance System, a top-secret (obviously) data collection and processing system. To make sure Orwell is an impartial big data monster, the investigators are recruited from outside The Nation. Just don’t ask – at any point – or there will be a great unravelling. The law states that all suspicions created in Orwell must be acted upon.
Also, the investigators are the only ones who can access ALL THE DATA. The supervisors, who have to act on the provided intel, can only see the information uploaded into the database from the sources via a simple drag-and-drop interface.  Uploads are permanent, non-revisable and in case of contradicting intel you’re the one to decide which bit is valid.
Here are the first major problems I have with the interface: due to the fact that the uploads consist of discrete sentences instead of “everything that’s highlighted”, you have to be quite careful to upload the intel you wanted to upload. On several occasions intel clearly marked as “in the past” in the source material would have gone up as a present-tense-statement, which gets extra bad when you try to put personal development on file and Symes takes it all as present, contradictory input. The same thing makes it quite hard to revise previously uploaded intel when new things come up, as – again – this is treated as present intel and hence contradictory. It is also quite important to differentiate between jokes and serious statements, otherwise things might look quite bad for your suspects…

During the course of the five episodes, our web of suspects expands in several directions, and with every suspect you get new people to investigate, sift through intel and decide what to put into Orwell and what to withhold.
Your actions actually matter as your input directly influences the behaviour of the state actors (e.g. going in guns blazing expecting someone being dangerous vs a more peaceful approach or finding vs not finding an IED in time), and as new people, new intel and new connections pop up the story throws several surprises and unexpected turns at you. That is, for me. There are probably people out there seeing things coming miles away.
This approach however has the drawback of feeling quite railroad-y quite often. One cannot upload intel that screams IMPORTANT! as the game wont let you, or wont let you yet. Also, the technical capabilities of the system are very much plot-driven: an early use of the insider alerts the victim due to a bug, and in episode five there’s suddenly a forced time constraint… no, a forced action constraint of 20 uploads. Out of the blue. Because processing data takes times and we act against a deadline. During no other seemingly time critical situation such a limit is in place. It also does not prevent you from considering your intel basically forever if you so desire. A simple clock would have brought more pressure to read, process and act upon data fast.

My main grief with the game is the ending.
While your actions actually influence the story, as soon as it comes to the ending you’re in a “push any one of these three buttons to play the corresponding ending”-situation. And that sucks. That always sucks. Nothing what you did before really matters anymore. You just get to decide on what you throw into Orwell and following that you get your ending of choice ™. Gah.
Also, there seems to be no way to replay previous chapters. Which is sad.

So, despite some storytelling shortcomings, some weird (or ill-explained) phantasies on the inner workings of crypto and a hopefully very weird premise on the inner workings of intelligence analyses, is this a good game?
Yes.Yes, it very much is. I you’ve ever wanted to serve as a lowly cog in a surveillance state, this is the game to do it. Give it a try. And be very wary when someone is pushing for new surveillance legislation to make your life more safe…