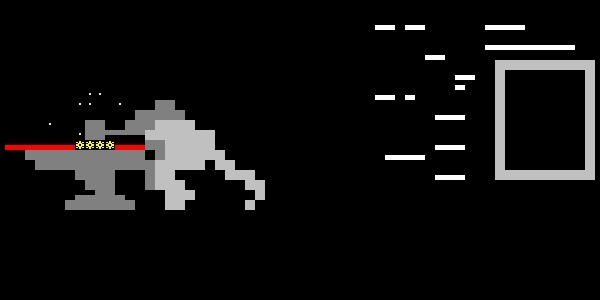 The season starts with another bunch of kobold thieves, trying to snatch some valuables and/or children. They run as soon as they are spotted, but this time they’re a little too close for comfort, thus reminding me of two things: start trapping the entrance and place a guard dog there.
The furnishing of the bedroom floor keeps going on: We now have in addition to the beds (θ) cabinets (π) and coffers (stone chests, Æ). Over time, every bedroom will get one of each. The first of the aforementioned other bedrooms is this: 4 rooms, stairway in the middle, each room will get a door, so each room will be three tiles big. This is for minor dignitaries. A bedroom, an office, a dining room and spare rooms, eg. for a private armoury. The first of these apartments will be given to Bëmbul, our expedition leader. The other type is essentially the same, but with four 5×5-tile rooms. The overall worth of a room depends on several variables, among them the size, whether or not there are walls on every side, whether or not the walls and the floor are smoothed or engraved, and the total amount of decorative objects. A statue for example could raise the net worth of a room. Wall material is another factor: normal stone walls are worth less than wall tiles containing gems or ore. Why is this important? Nobles start asking for stuff. Bëmbul currently just needs a meager office (a single tile with a chair on it would suffice) due to his job as bookkeeper. We gave him quite some extras: the full set of modest rooms. Other nobles will require more luxury, which is why we will need the bigger rooms.
To take some more control over the amount of produced goods we can use the manager. Placed work orders need to be validated by our manager (which is why it is a good idea not to send the manager on hauling duty) and is automatically passed to the workshops afterwards. By ordering our stuff in batches we have better control over our stock then by just spamming orders in the workshops – this is especially useful when we need a large but finite amount of something. Furniture, for example. Crafts for trade? Keep ’em coming.
Two new workshops have been built: The left 5×5-room is a siege workshop, the right one a kennel. In the siege workshops we can build siege engines (catapults and ballistae) to defend the fortress, in the kennel we can tame and train animals to use them for hunting or war. We start building enough parts for three ballistae to place them in the entrance. We also build parts for two catapults to set up a shooting range, as both types of siege engine use the same skill. Catapults use rock as ammunition (which (figuratively) grows on trees here), while ballistae need special bolts, so catapults are the cheaper choice for training – especially as we have a distinct lack of wood around here. The row of ^’s in the entrance stands for a row of stone fall traps. They are exactly what it says on the tin: go there and a stone falls on your head. They are not particularly effective, but they deal at least some damage. Between the bridges, a guard dog has been placed on duty. The § shows a rope, chain or other type of restraint, the dog can move one tile around it. I probably should train one of the other dogs to a war dog and place him there. This is the list of all the animals in the fortress available to us. There are wild animals, but unless we catch one of them they wont be listed. We can toggle several flags here: the availability shows whether or not a dwarf can take the animal as his pet. Pets generate happy thoughts, unless they get hurt or killed or die. Cats choose their own owners. We can also mark animals for slaughter, resulting in steak for our citizens, hide for the tanners and bones for the crafters, we can geld them, or we can train them for war or hunting. I’ve just marked two dogs for hunting training and one for war training. Unfortunately, not all animals can be trained. I’d love to give our commander (we will get one eventually) a war water buffalo.
Also, some migrants have arrived. Another nine dwarves strengthen our ranks.
The war dog is trained and chained in the entrance, siege engine parts get finished and more bedrooms are created in the cellar – nothing particularly interesting happens until the first of the catapults is finished. We turn it towards the ditch on the lower end of the room (stones used in catapults don’t get destroyed on impact when they can fall more than one level, at least that’s how it used to be) and give the order to fire at will. Any siege operator with too much time on his hands will now show up and throw some boulders around. The ballistae at the entrance are also ready, but we wont produce any ammunition before we have all the beds we need. Some more projects were started and are advancing according to plan, but there’s not much to show until they are done. Autumn has come, and in the next episode we will finally see some trade with the mountainhome.